Me Too
Me too am America
Of immigrant grandparents
Me too have extraordinary dream
Like those of the past
Me too want success
No matter where
I come from
Me too have ancestors
Wanting to follow in my dreams
Nobody will dare say to me,
I can't
Because Me too am
America!
I can, I will and I should
no matter what they say,
No matter what problems occur
Because Me Too
Am America!

WHAt is the american life?​

To be american means many different things to many different people. I think being american means you are from some part of america. Many people view Americans as a negative thing, or as a view of having more rights than others and being treated equally. Being able to come to this country to work hard and get what you want. Some have more rights than others simply because there american. While  some view this as a negative thing some had positive view of this. A negative perspective would be people will judge you and say your not an american based on the color of your skin. Positive effects would be Americans are "rich", successful and receive a higher education, which sadly isn't completely true. Having the american dream is coming to a country and being whoever you want and furthering your education to succeeded at life, make more money, own a nice home, and get whatever you want. Being american doesn't mean you live in america or were born here. Being a different skin complexion and having different beliefs don't make you not an american. We should all be american, were separate but equal.

I scored a 4 and a 4
Pokemon go is a serious problem! Pokemon go is a very popular game, where you travel to different places and try to catch all pokemons. Although this game might be fun it’s actually a distraction which is dangerous, it’s a criminal target and you’re giving out your personal information. According to articles B,D and E pokemon go is a horrible game.
As a result you travel to different places having to look for pokemons it’s an enormous distraction. Document E, “ The Psychological pros and cons of pokemon go” says the players are being distracted on their phones. This later leads to a heightened “stress” state, causing players to be less social and decrease their ability to talk with others. As document E states, “It’s increasing the difficulty of separating reality and fantasy,” since most of players rather play the game than actually socialize. For example one day I was at the beach and there was hundreds of people playing pokemon go. They rather play on pokemon go, an online game than rather interact with the people around them. Another example is a while ago on the news there was a story of this boy who was playing pokemon go about to cross the street but he was so distracted he got ran over. All this evidence gathers up to why I believe teengaers should not play Pokemon go, because it's a huge distraction and very dangerous.
Pokemon go is a criminal target! In fact when distracted playing the game,players are being targeted by criminals. Document S, “Is Pokemon Go Good For Our Society?”, the author states, “A police department in Philadelphia warned on twitter, “ Be mindful of what you play online.” As it’s a string of armed robberies followed by suspects who target their victims through the game. The game has a map and shows where others are, leading a path for criminals to find their victims. The game also includes Pokemons that have been found inside someone’s home, leading to a criminal coming inside your property. I believe teengagers should not play Pokemon go because it’s an enormous criminal target.
The last reason to why I believe teenagers should not play Pokemon  is the game is giving away your personal information. As referred to document B, Pokemon go requires data and not a little. The game requires a lot of data. We all  agree on the terms and policies, but do you really know what the companies doing? As document B states, “Pokemon go uses your location your IP address and the web page you most recently visited before playing. All this is connected with your real name and account information. The game knows your your location to direct you, but this information can be misused. Your information is all being transferred to the company, which is their using to prepare for their future business. Although many believe the game is fun and safe, I disagree because it’s not safe to give up all your information. Your information should be secure for yourself only. I believe Pokemon Go is a horrible game and should not be allowed for kids and teens to play.
In conclusion teenagers should not play Pokemon go because it’s an enormous distraction, it’s a criminal target and you're giving away your personal information. The game has had many dangerous stories in the new and has even caused accidents. Pokemon Go is a serious problem! 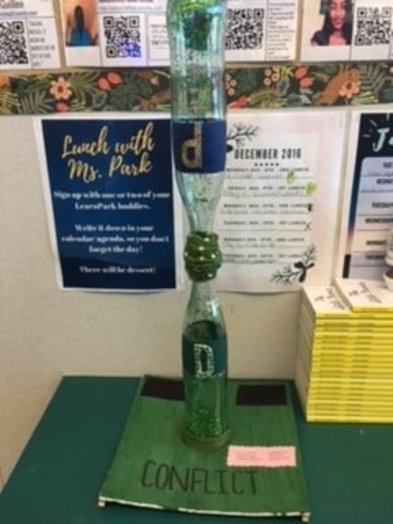 This project is based on the chapter of the drunkard. He is drinking because he's drinking so he continues to drink. The bottles are in the form of paradox and a time glass, as time goes by he spends his time being ashamed and drinking. When you flip the bottles over the glitter which represents alcohol goes into the other bottle which is a form of impact. If he's ashamed but his only way to feel better is through drinking, impacts the way others think about him and how he feels about himself. The rest of the board is green to represent the drunkard since he was wearing green and the little princes's bottle is blue because he was wearing blue.

The image shows a person thinking connecting to the cloud. The image image its connecting to a cloud, which is an irrefutable truth. It's 100 percent true, absolute or uncertain. Perception is an intuition of mind the way its viewed. A doubt can be cotton candy or popcorn or even a mushroom. Its uncertain or not true. Religion culture and tradition influence the way we draw these images and the way we view things in life. Which contributes to perception and doubts. Irrefutable truth is seeing out the window and smells. Doubt would be men lovely bad and chemically referring to a flower.

​Our schools are banning junk food forever! Junk food is considered unhealthy and nasty with the ending result of obesity.  Schools think the best way to end this is to ban junk food from the lunch and snack bar areas. In articles A and B, it shows how banning junk food can be an awful decision. Junk food is very unhealthy although certain junk food at various schools are low in fat and not as “unhealthy”. Banning them isn’t the best decision to prevent obesity amongst children in our country. I believe we should not ban junk food at schools but instead educate students  to make good choices. Students should be able to pack their own healthy lunch and be allowed to take them to school. Banning junk food should not be allowed because not everyone is obese.
The first reason I would be against banning junk food is because school is all about learning how to make satisfying choices. Children should have options in making these gratifying choices. Banning junk food is limiting the ability to make these excellent choices which only teaches children to only have one choice which is healthy food. They do not have the option of looking at the various junk food and deciding for themselves that this is not going to be healthy. For example,  a more efficient way for society not to reach obesity is to have more physical education. It’s a better way to approach obesity than banning junk food all together as referred to resource A. If a child had more physical activity at school then they would be losing or maintaining an ideal weight.  As a result of banning junk food at schools, it doesn’t just limit their eating habits but also limits their ways to make positive decisions. A child should have at least an hour of physical activity each day at school to help prevent obesity or maintain a healthy body. Banning junk food is not a great decision because it limits children to make healthy choices.
Another reason why banning junk food is an awful decision  is because  home food or packed lunches will not be allowed at schools. Many parents like to pack their children lunch and these children like to eat their own home lunches rather than school lunches.  With the ban of junk food this won’t be permitted, as referenced in resource B.  It concludes schools can’t control what parents feed their children at home since there’s no one to guide them. Resource B states, “A Florida family was upset they were told they could no longer pack lunches for their daughter.” Many of these parents took is as if their lunches didn’t qualify and didn’t meet the “healthy” standards.  Many parents do pack healthy lunches and if they were given a guide as to what they could pack there wouldn’t be any problems.  I believe that banning junk food in schools should not be permitted because it doesn’t allow parents to also learn how to pack a healthy lunch. This way parents and children are learning how to make a healthy lunch at home too.
Lastly, I believe junk food should not be banned in schools because many children won’t eat at all. Resource B states, “As a result of Michelle Obama’s new policy, 1,086,000 students stopped buying school lunches.” Children also expressed their anger. A middle school and high school boycotted for 3 weeks because the school changed their sandwiches to meet federal standards. Another horrible effect will be many kids will stuff junk food from home into their backpack and eat it after school or they'll find another way to sneak it into their diet. As a student at Mendez,   I have noticed they have stopped selling snacks at the snack bar for a couple of months. As a result of this, I have noticed many of those same students who used to buy snacks, bring their own bigger portions of unhealthy snacks from home in their backpacks. Many believe  banning junk food is a wise choice because kids will be forced to eat healthier.  Although I disagree with the ban because it only makes kids want to go home and binge on junk food that they had no access to at school and perhaps forcing them to eat even more.  As a result of this, banning junk food at school is an awful decision because kids will no longer want to eat or they’ll sneak in bigger portions from home.
In conclusion, all these reasons lead up to how banning junk food is a horrible decision and should not be permitted. The ban of junk food at schools should not be permitted because it leads to limiting students choices of food, no more packed lunches from home, and children just not eating at all during school time. All of these reasons  lead to kids going to school knowing they're not going to have anything to eat all day since the federal standards don’t meet their expectations or taste buds. Junk food should not be banned in schools because it builds a wall for kids eating habits!

Is Google Negatively affecting our intelligence?