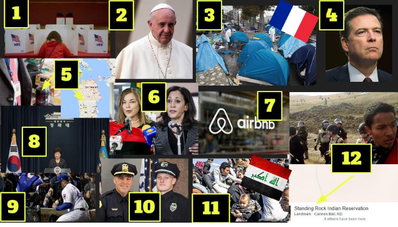 Number #1: Voting for the new president of the United States and the last day to get your results in are November 8th.
Number #2: The pope said no to women priest, only men can become priest.
Number #3: The Police moved 4,000 people out of migrant camp in Paris
Number #4: James Comey says something bad and makes a bad call and Donald Trump could "win"
​Number #5: The Coca cola hires a new leader in San Francisco and raising taxes on the soda.
Number #6: Loretta Sanchez in losing Latina votes and Calla Harris is winning.
Number #7: Air-bmb makes it hard to sew against discrimination.
Number #8: President of Korea was involved in a scandal and said it was all her fault.
Number #9: The cubs make history again and win the world series 100 years later.
Number #10: 2 iiowa cops where killed
Number #11: N.Y.P.D SERGEANT DEAD, 2ND WOUNDED IN BRONX SHOOTING
Number #12: president Obama found out a way the pipelines where going to standing rock.. What did I learn today?

Today I learned in the first critical current all the different things on the news.  I learned about shim-in Perez the prime minister died and that all genders could use the single restroom. I also learned that Kevin Duran made it to the golden state warriors. All these things I didn't know where going on in the world around me.